The knot of the knocker –  Breast Cancer with a Lacanian

Prep Day – Today began a month of no return. To use Hook’s Law, it is the point where the elastic limit is reached. The moment when any additional force (no matter how small) is enough to permanently stretch the spring. A spring that has been stretched past its elastic limit and will never return to its original shape. Note the hue of blue dye as a reminder of the SLNB which took place on October 8th 2015. See the chapters on my cancer surgery.

Anyway today, I was introduced to the radio therapy staff. Prone in my gown I lay, whilst cold, metal rulers were used to measure distances. The machine whirred and whizzed. Photographic images taken. Preparations were made. I was tattooed with three tiny dots  because tomorrow radiation begins. Da da da…

DAY ONE – In dignity I walked the forty minutes to the hospital. Nurses whisked patients from the out waiting room to a changing area. Once inside I tentatively lay on the machine. My gown was parted to allow the technicians time to double check the distances. I lay still, stiff as a board. The tingles along my leg were a sign of tension and anxiety. The area of the aerola contracted as if responding to ice. Background music, Ellie Goulding’s Burn played nonchalently as I bit my lip. Hoping that radiotherapy doesn’t burn.

DAY TWO – I walked to my ten o’clock appointment. The technician required a stool to give her enough height to lean across and check my measurements. Her clip-board casually placed upon my legs. The machine was “a bit out” so the procedure was halted. Re-measuring to be “closer to the lung” it sounded a little shocking, but hey. Again radio music accompanied the process this time it was INXS New Sensation. 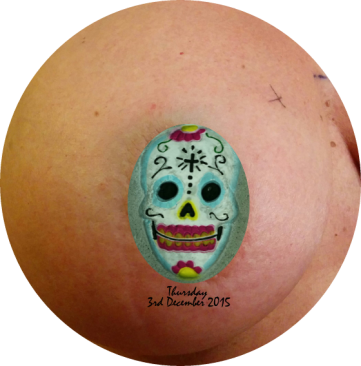 Later in the evening, yoga, without the chaturangas gave some quiet head space. OM indeed!

DAY THREE – It was all a rush this morning so I hailed a taxi. Yesterday’s felt tip markings were still visible across my skin. The radiologist marked me again but this time with a thinner fibre tip. X marks the spot.  The music was on cue. Seriously, this time the coincidence was too close to the bone. My tears fell onto the head rest. Annie Lennox and the dulcet tone of The Eurythmics with A  Thorn in my Side, so apt. Humming “Run, run, run, run”  I bought an emolient to nurse my wounded ego and prepare for the last session of the week. 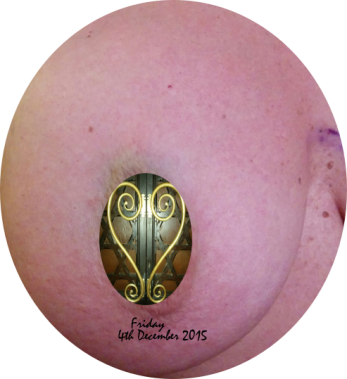 DAY FOUR – Yes I was waiting in suspense to hear the music for today. Surprisingly I was greeted by a comfortable silence in the room.  All through the week my arm had been held in a vice-grip above my head. Today I risked asking if the angle could be less painful for my shoulder blade. Relief was immediate and the session was over remarkably fast.  No weekend sessions. 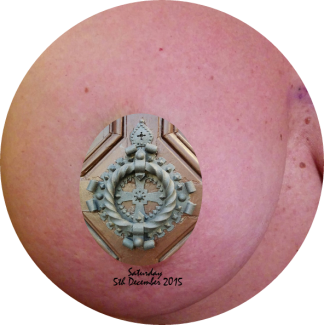 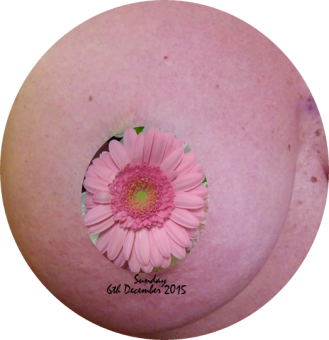 DAY FIVE & DAY SIX – My weekend was a respite from the intensity of the daily sessions. However in the middle of Sunday night I was awoken by an excrutiating pain on the ball of my foot.  I was convinced that my poorly breast had screamed out a protest. Sure that my point would be confirmed by a glance at a reflexology map I soon discovered that the part of the foot that relates to the breast is in fact on the bony top part below the toes.

DAY SEVEN – No music to accompany me today. No gown either. Yikes, I’d left mine at home. With a smile I was directed to a pile of crisp, clean and folded alternatives. There was no doubt that the show would still go on! In the evening I attended my yoga class. My instructor had been quietly told of my situation. Today she too shared with the class her own shock. The loss of a very dear friend after illness in New York.

DAY EIGHT – How life becomes routine. The breast is grateful for emolient but I take care to shower it away the morning before the next radiotherapy treatment.

DAY NINE –  Today I had to wait 45 minutes because, “the machines were playing up” on both sites. The wall was damp in the waiting area and resembled a Rorschach Test. I found a study using the Ink-Blot Test as an “Instrument for Evaluating Quality of Life in Breast Cancer Victims” or survivors or thrivers as we are known today.

DAY TEN – “ror-shock” – life is nothing but a  Rorschach Test. It is all perception, gaze and how we interprete our world. 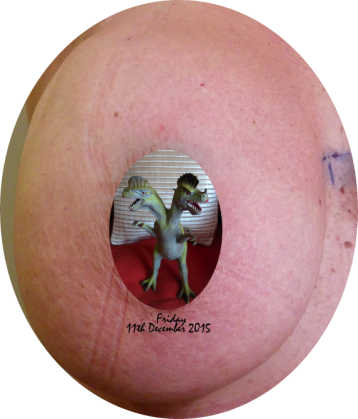 DAY ELEVEN –   Second week in the bag. There is a slight pitting where the tissues are more turgid under the scarred area. 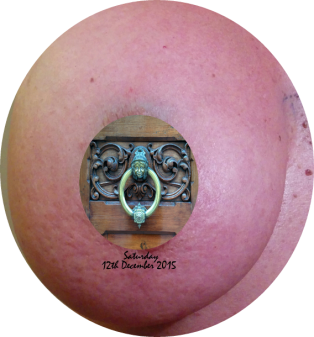 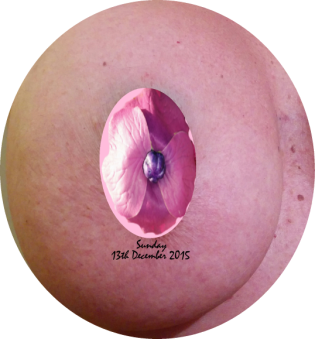 DAY TWELVE & DAY THIRTEEN – As you can appreciate the skin is hotting up a little.  Even though the treatment is on pause the effects can be felt. The breast is starting to feel hotter.