The ‘K’not of The Borromean Knocker

The Borromean Knot is formed of three rings which are linked so that if one of them is severed, all three become separated.  Thus no two rings are linked directly but all three are collectively intertwined. This is also termed a Brunnian link.

Lacan uses the Borromean Knot as a topology to illustrate human subjectivity and the interdependence (within the subject) of the three orders of the real, the symbolic, and the imaginary (RSI). Lacan’s Borromean Knot is a tool to examine the interconnectedness between language and the body. Language is essential in nuancing experience, adding that rebel flare of uniqueness where an invented word or Freudian slip might reveal the marrow of meaning. Language is how we share our stories. Meaning can sometimes be read in other ways: the gaze, movement, tears. Meaning is down to interpretation of the symbols given. Read my story and see what it means to you. Every story has a right to be told. Every story touches every reader with a new uniqueness.

Βreast Cancer Stories begin with a diary of chronological events. Time has an effect of order and disorder as a cancer treatment progresses with a sequential and consequential rhythm. These autobiographical events are interlaced with Lacanian concepts, sometimes narrative, prosaic, poetic, oftentimes opaquely viewed through the author’s Lacanian lens. I am no expert but hope to frame parts of my journey with a psychoanalytical slant that provides a fly on the wall perspective into the marvels, the mysteries and the (in)sufficiencies of science whilst drawing a ring around philosophy and creativity. Lacanian terms will be used such as: the gaze, the gap, the sutre, the borromean knot, the fourth ring, suppléance, objet a, jouissance.

Borromeanknocker shows a lived experience of the union of Lacan’s three orders. Surely, anyone stepping into a breast cancer arena for the first time and hearing that they have cancer will be faced with the Real. A place where the mind sinks into an unfathomable world, where nothing connects, a place beyond the expressable. Next comes the Symbolic Order where on the cancer path a new schema of neural networks are laid down to comprehend an entire medical universe, a new orbit of language, a “medscape” that grows from nonsense to become a cancer patient’s thesaurus facilitating communication from novice to pro. Alongside these is the Imaginary order, which contains our fears, nightmares, wishes and our own best self-image, our “ideal ego” which is the way we strive for others to see us: survivor, thriver, victim, statistic.

Borromeanknocker is written in a language to suit at least three audiences. First for myself as I indulge in a cathartic leap of creativity in my role as writer and patient. Second for those interested in one woman’s breast cancer journey, albeit a qualitative linguistic-ethnographic account. Third to the possible chagrin of contemporary scholars of language this account has a psychoanalytical Lacanian flavour centred around the signifier and how our relationships with “the other” are bound as gendered subjects through language. Our bodies, our desires and our human communication define our social identities. These dimensions can take a knock-back when cancer calls. Cancer can be lived as a tsunami that strikes and resonates upon our identities, upon our language, upon communication. It leaves behind a day to day heap of physical and emotional debris. How we choose (with the choices left to us) to reinvent ourselves and continue forward, is as individual as any recipe for life.

The rest of this entry addresses the topological borromean rings more thoroughly. 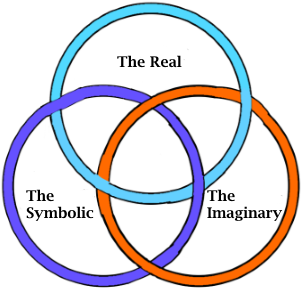 The Real Order – In the beginning, the order of the Real marks the earliest time when the infant is bound with nature and where early primal needs are satisfied. There is no sense of separation between the self and the world beyond. In this state the Real is a place of completeness for “his majesty the baby”. “His Majesty the Baby” as coined by Freud in ‘On Narcissism’ is rewarded with total devotion: point and receive, scream and be satisfied. This is where parents feed an innocent megalomania in their nurturer-child symbiosis. This completeness is fragmented by the introduction of meaning through language (the beginning of the symbolic order). Once the individual enters into the symbolic, commonalities are forged which create pathways of  meaning through neural networks. Thrust into the realm of semiotics infants become forever barred from the comfort of that first safe place.

As an adult, the Real is stepped into where no symbolism reaches. The Real is found without being sought. It is captured by looking awry and through that glass darkly.  It appears as an enigma. The Real is glimpsed in a gasp of a “now” that has already passed. It cannot be symbolised. Any contemplated interpretation or understanding of the Real is achieved after the fact, through the symbolic. The real may manifest in that sudden wordless sensation of realizing the existence of something abhorrent in one’s current situation.

The Real is held by an internal failure, a stoppage or a juncture that defies symbolization. It is an encounter with dislocation, trauma, aversion, where the symbolic cannot function as an interpreter. Žižek attests to the Real being viewed three ways. The real Real, which faces us directly with the horrifying “thing”. The symbolic Real which is viewed as ciphers and codes pertaining to meaningless formulas, and the imaginary Real which brings us in touch with inner most fears, anxieties and morbid obsessions. In the Real we see ourselves in an unrecognizable Otherness that provokes disgust. The Real itself is “nothing but a grimace of reality” (Žižek, 2002: xvii, cited by Glyn Daly).

Edward Munch’s painting The Scream is a good depiction of the deafening silence and anguished wordless reality when faced with the Lacanian Real. To use one of Lacan’s examples, “a knock on the door that interrupts a dream.” My life as a dream with its normal ups and downs – until the not discovered knott came knocking. The real is never directly present to our experience, but rather makes itself felt in its contingent effects. There is perhaps a suggestion here that our day to day world is akin to a dream or a mask that conceals the real. When the Real hits, its unanticipated, unpreventable interruption threatens the coherence and integrity of the life we know. Illness, death, or explosive life changes force us to face the Lacanian Real.

The Symbolic Order – The symbolic order is reliant on a joint agreement of meanings which ideally give clarity by circumventing confusion. From birth, babies are faced with an immersion into the symbolic, “As soon as the symbol arrives, there is a universe of symbols” and these symbols demand obedience to laws and contracts for effective social cohesion. Some of us find these easy to follow, others blunder into faux pas.

These laws are designed to restrict and control human desire and communication. The symbolic creates our known ‘reality,’ our day-to-day world which is described and classified by mutually understood codes that enable thought and comprehensible talk. Whilst the symbolic order is anchored to the linguistic dimension, it actually carries the human transition from nature to the domain of culture, of which language and its exchange of signifiers are the greater part. In creating meaning we depend on the field of the Other, whose presence stretches back into our distant ancestry. From the first human communication, from pre-verbal to the modern lexicon, the multiple effects of signifiers have been built over time. These structures form us as reactionary subjects within the symbolic order today. Words have importance within the symbolic order but the meanings of words are not always meant at face value. Signifiers are built communally and with each individual’s history. The realm of the “personal symbolic” has a depth of meaning held by the unconscious. A psychoanalytic interpretation of signifiers in wakefulness or dreams may reveal deeper meanings by delving into the root of a subject.

The Imaginary Order – Lacan’s Imaginary Order is not exactly a realm of images and imagination but of appearances, semblance (an inner disposition toward oneself) a memory of a presence and the affect of bodily sensory perception. It is a pre-language development state where the Ego develops. It is something that exists in the mind regardless of its existence in real life. Through imagining, one can identify with other people and images and view oneself as the other, or assume the other as oneself. For the infant and throughout life, the process of self-construction entails borrowing and appropriating images that become a constitution and reconstitution of the self or ego. It begins with the Lacanian “mirror stage” which is formed by silent interactions, experienced through visual images rather than words. A state of fantasy between our inner Innenwelt and outer Umwelt; these worlds form an inner sense of what we see and hear and how we internalise what is happening to and around us.

Self-representation is underpinned by how signification becomes arrested by fundamental images of ourselves that provide us with a sense of coherence regarding our place in the world. We “narrate” ourselves around core images with which we identify and/or wish to project.

The visual act has two parts, the eye and the gaze. Via a reciprocal gaze the infant is introduced into the world. The eye of the subject (the infant) looks out at the object (its mother), whilst the gaze “le regard” is received by the object being looked upon. The child’s first sense of wholeness is as being inseparable from its mother. The infant’s illusionary control over its environment is slowly fragmented by the universe of “otherness” whereby entities are hidden by words and engulfed by symbolic protocols not least absence and separation. Once the infant recognizes that its body is separate from the world and its mother, anxiety and loss result. 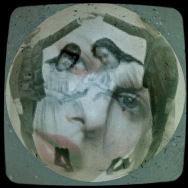 The infant has a simultaneous self-recognition and mis-recognition of its reflection. The mis-recognition comes about in that what the infant is seeing is not itself but a reflection of itself. A reflection that it owns and carries as its idealised image “Ideal-I” into the larger social order and which becomes a product of identification and absorption into discourse with others. Thus, this fantasy image “Ideal- I” is filled in by others who we emulate, assimilate or repress in our adult lives. Adults seek identification with ideas (as well as images) in order to compensate for their sense of frustration and the aggression and narcissism that arises from a desire to be coherent. But coherence is thwarted by competitive relations, rivalry and an envy that creates a polarity between alienation and recognition. The disconnect (dissonance) , between a coherent image and fragmented sensation, continues according to Lacan to be a part of the person’s life for as long as he or she lives. It leads Lacan to conclude that “the object of human interest is the object of the other’s desire” (1955-1956b p39).

Writing belongs to the imaginary order. Of course the interpretation of what is written crosses into the symbolic to make sense of what is read and to unpick the depths of meaning. Once uttered, words traverse from the silent ponderings and possibilities of the imaginary to the spoken symbolic order where meaning is situated in relation to otherness and the big Other. ‘The big Other’ regulates meaning and cultural expectation. It is the unwritten “rules” that bind us by etiquette and the conventions that make us part of our social group: going for a beer, taking tea, shaking hands, attending our 9 to 5, and of course following the doctor’s advice. But sometimes words are not enough, neither those spoken as reassurances nor those written as prescriptions for health and happiness. Sometimes words just don’t cut it.