Notes ♪ of the knocker –  Breast Cancer with a Lacanesque Tune

MUSE – Sunburn
–  Monday 14th December 2015  –  Now into the swing of things my arrival at the hospital seemed routine. So let’s begin the third week with some selected melodies! Rather than the shocking fluff of “random” though suspiciously on theme radio tracks, this Radiotherapy Play List is not for the faint hearted. Perhaps it will reveal a few ideas that cross the minds of a significant percentage of our breast cancer collective conscience.

MUSE – SUNBURN – Come waste your millions here, secretly she says.Another corporate show, a guilty conscience grows.And I’ll feel a guilty conscience grow.She burns like the sun, and I can’t look away. She’ll burn our horizons, make no mistake. Come let the truth be shared, no one ever dared.To break these endless lies, secretly she cries. I’ll hide from the world behind a broken frame. I’ll burn forever, I can’t face the shame. And I’ll hide from the world …

Tuesday 15th December 2015  –  Have you ever wondered why each hospital has a separate radiotherapy building? This is where my crazy imagination visualises the flow of daily out patients from the start of treatment to its finish. Like following the cheery Pied Piper –  convinced by the statistics that we are doing the right thing.We have to believe that it is going to make us better.Whilst it feels like Hobson’s Choice!  So believe!

BLUE OYSTER CULT – FLAMING TELEPATHS –  I’ve opened up my veins too many times.The poison’s in my heart and in my mind. Poison’s in my bloodstream. Poison’s in my pride. I’m after rebellion I’ll settle for lies.Is it any wonder that my mind’s on fire.Imprisoned by the thoughts of what to do…

Wednesday 16th December 2015 –  Here again the persistent theme of denial is the tonic. Juxtaposed by obligation and making the right choice.   In 2014 “Robert Smith and Co” played two, epic, three hour sets at the London’s Royal Albert Hall for The Teenage Cancer Trust.  Let’s embrace music and boogie! Afterall it is “The Cure”.

THE CURE – HOT HOT HOT! – The second time I saw it strike I saw it in the sea. It lit up the fish like rain and rained them down on me. For a second that boat was still afloat, then everything went black. I left it underwater and I never went back. Hey hey hey!!! But I like it when that lightening comes. Hey hey hey!!! Yes I like it alot. Hey hey hey!!! Yes I’m jumping like a jumping jack. Dancing screaming itching squealing fevered. Feeling hot hot hot.

Leonard Cohen – Who By Fire? 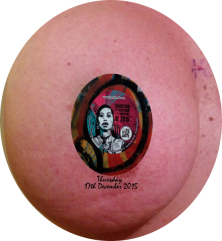 Queens of the Stone Age – Burn The Witch

Friday 18th December 2015  –   No matter how alone we feel we are 1 in 8. 1 in 8 women and 1 in 870 men will be diagnosed with breast cancer during their lifetime. Most invasive breast cancers occur in the upper-outer quadrant of the breast. No matter what we think whilst we are bound to the rads machine with our hands above our heads we are 1 in 8. There are agencies there for us.  There are people who will listen. We don’t need to keep our mouths shut.  Get in touch remember we are the 1 in 8, fancy a chat?  Call The Haven. 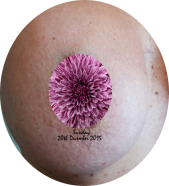 Saturday 19th and Sunday 20th December 2015  – You may not know that Sheryl Crow is amongst some well known &  famous breast cancer survivors.