The recommended hospital check up on August 17th became a dizzy drama which had ended in the collection of three biopsy samples tagged with the verbal verdict “suspicious of malignancy”. We now fast forward a week to August 24th for the consultant’s truths and the clinical evaluations of the extracted tissue. Cancer is bad enough. But breast cancer is not just a question of removing the invasive tissue, the damage is more often than not on display for all to witness. Sweaters or shirts, yoga or work, small is beautiful, big is better, size doesn’t matter, asymmetry is the new me. Aesthetics are examined because the gaze is where it’s at and choices are weighed according to appearance. Seen, gazed upon, evaluated by well qualified clinicians and ones own inner critic. Yet only the survivor will know how or what they feel. Once the “C” word has been uttered the die is cast – the journey has begun.  And how different it is to be the follower of the path rather than the one who watches the follower trip-trap, trembling into the face of the unknown.

The speed of events leading to that place called “diagnosis” leaves a cut that strikes to the quick. The cancer journey traverses the path of the Lacanian Borromean Knot at a surreal pace. The criss-crossing shifts between the raw horror of the Real Order to the incomprehensible medical spiel in the Symbolic Order. Here one hears a series of numbers and ciphers that announce the severity and spread of the tumours. All of it takes a while to sink in. How does a mere mortal with no medical knowledge interpret, contemplate, face or side step these truths? How if not with flights of fancy, fear and fortitude? The Imaginary Order assists to re-play all possibilities no matter how far fetched.

For one who enjoys contemplating all case scenarios in order not to get nasty surprises a mastectomy or even wide spread malignancy were in that worst category. How does one deal with the receipt of such news? In the past week my knowledge and reading about breast cancer had increased exponentially. I had over forty windows open on my cell phone. The most difficult to assimilate was recent publicity regarding over-diagnosis. Particularly I was concerned about an apparently benign type of cell disorder namely DCIS, ductal carcinoma in-situ. Yet this bugger of a stage zero cancer pointed to all sorts of possible future complications and is often treated with double mastectomy. Okay if a huge tumour were present then a mastectomy had to be the course of action but if they’d discovered one of these supposedly benign dubiousities what would be the decision then? Throughout the week my imaginings ran riot and my non-medical brain clung to “watchful waiting” an expression that seemed to do very nicely. My semi-subconscious had affirmed that if it were all neat and small then it would be permissible to “just wait and see”. Maybe the bad cells would slip away unobserved if they weren’t given the centre stage. Mastectomy however was on another astral plane. Of course anyone in this situation goes through the list of “what ifs” and it is necessary to do so. It is necessary to prepare oneself for the decision making to come; to arm oneself with the knowledge and try to find the strength to take the next step. It is natural to consult and scan the evidence from: medical trials, hospital case studies and those who’ve had first hand experiences in blogs and forums.

If a mastectomy were needed then so be it. There is no choice remaining if that is the considered treatment. So easy to say and so quickly contemplated in that safe imaginary space. But then what? Then comes chemotherapy, being irradiated and the immediate discussions about remaining flat or facing reconstruction. Now that is a biggie because often it is the patient’s choice. Never have been good with choice – how can anyone know what is for the best? As a big breasted gal having part of my body replaced with a prosthesis goes against the grain. I like my breasts. I’m slim, I maintain that lollipop shape and I like my breasts. But maybe that is the reaction of many. Would choosing flat be closer to remaining me? Remaining authentic?  Would a unilateral operation then soon imply the need for a double mastectomy just for gravitational balance? What would the physical complications be if the healthy side remained a 30GG? Becoming so lopsided is probably asking for future structural and musculoskeletal complications! A one breasted quasimodo! 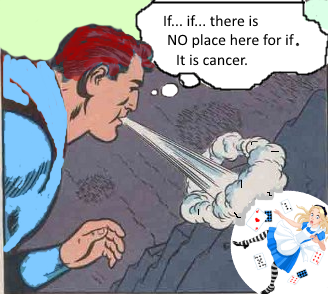 In the consultant’s room I had the letter in hand, the classification was U4. Falling into the biopsy procedure seemed almost an accident yet a lump had been noticed. It wasn’t just routine. I myself had flagged up the possibility that maybe there was an irregularity, an irregularity that was part of my body topography and that had been noticeable as a visible palpable knot for months. I heard myself explaining this as the consultant sat squeezed in front of us in quite a tiny room. About to embark on my “leave well alone” strategy I began to speak, “If it is a cancer….” Before I could say more the consultant had doubled in size. He rose up in his seat and rapidly stiffened, bracing himself to reply. His response to my bargaining plea almost knocked me into the back wall. In retrospect I don’t think he spoke loudly but his tone and gust of breath gave no room for nonsense. “IF…if… there is NO place here for if. It is cancer!”

That piece of straight talking brought us all into the here and now. No menacing real, no vague cloud of symbolism and no room for imaginative reprise. Yet all the Borromean elements were present. The real like a spectre in the corner. The symbolic of voice, body language, gaze and scientific convention opened a chasm between us. The rabbit hole was widening as I was falling further and further away from what I new as tierra firme.

They’d not discovered a benign lesion. It was a baddie. It was not DCIS or a cyst or fibrous tissue. It was IDC. Invasive Ductal Carcinoma that the biopsy had siphoned out. Leaving rogue cells (that had already broken out of their region) to possibly spread further around the body was out of the question. There were no ifs nor buts, it had to be excised: scalpel brandished and incisions made. The consultant wasn’t part of the team I had seen on the day my world was turned on its head. He gave little room for chat. He was very matter of fact and an operation was going to be planned. The lump was to be removed, clear margins sought and the sentinel lymph nodes biopsied. Only after the surgery would the specialists really know what they were dealing with. What imposter was I harbouring? BUPA was mentioned. Could BUPA be a saving grace? Everything was already moving way to fast and the surgeon most likely would be the same guy whether I were to choose private or not. Why fast track to BUPA?  I’ll stick with the NHS. The word “lucky” began to infiltrate into conversations. Lucky to be in a part of the planet with a pretty amazing healthy care system. Lucky that the malignancy had been found early.  Lucky to live not so far from the hospital. Lucky not to have to consider those worst case scenarios. Lucky to be relatively young, very fit and healthy. Healthy! Yes healthy – Bah humbug – Lucky Lucky Lucky.